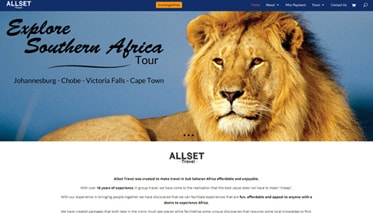 Allset Travel strives to make bucket list events both affordable and enjoyable. Their laudable goal is to bring people together and facilitate experiences that are fun and affordable, appealing to anyone with a desire to experience Africa.

Initial testing established that the website was taking an incredible 200 seconds to fully load. JavaScript, QueryStrings and the order of scripts was causative in slowing the loading to a sloth-like crawl. More specifically, the WooCommerce QueryString was taking dramatically long to successfully execute. Of both the customer’s own Web Developer and SEO consultant, neither had succeeded in finding any other potential coding or SEO associated issue.

Our meticulous team proceeded to diagnose the cause of such dramatic slowness by first analyzing the processing of each PHP request. During this process, we managed to identify a deleterious configuration problem: the WordPress Virtual cron (wp-cron.php) was being called upon every single request! It was hardly surprising that upon disabling this function within the wp-config.php, the website’s overall loading speed was drastically reduced to a mere 10 seconds, which now looks comparatively expeditious.

However, outside of such resource consuming errors, it was veritably the absence of both a caching plugin and a static query string that was causative in the initial slowness. We suggested that the client should use the W3 Total Cache, combined with an effective CDN to spur the rendering speed of critical components, such as the embedded CSS and JS.

By application of the above solutions, we arrived at a dramatic improvement: the website was accessible from request to load within 6-7 seconds. This was comparatively miniscule to what had previously been an incredibly lethargic 200 seconds.

What is your Wordpress Case?